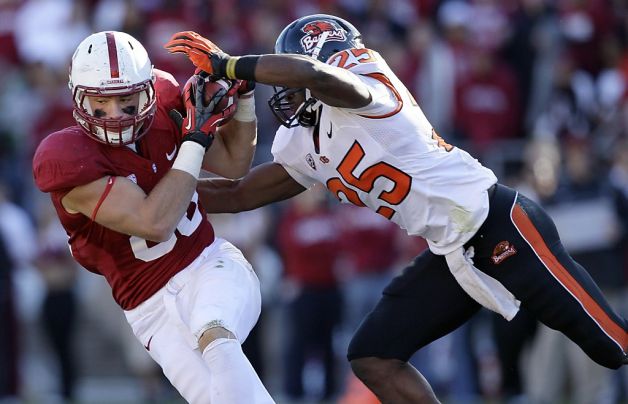 Understanding exactly what kind of force leads to football concussions for some athlete’s is a mystery that a team of innovative Stanford researchers are working hard to discover.

The team have turned Stanford football practices into a living laboratory by placing sensors on the helmets of athletes then filming the action with high-definition, super-slow-motion cameras capable of estimating the initial velocity a player’s head is traveling before and after impact.

For the first time, researchers can analyze in slow-motion what happens to the head and the neck at the moment players collide.

In order to gauge the linear and rotational acceleration of a player’s head during a game — researchers have developed high-tech mouth guards equipped with accelerometers and pyrometers.

“We’ve got a really unique opportunity to get the data that matters the most – the human data,” said David Camarillo, Ph.D, an assistant professor of bioengineering at Stanford told the San Francisco Chronicle.

Early findings in this cutting edge research have shown that a player might experience similar forces in a high-impact shoulder-to-chest hit as they would from their head hitting the ground — revealing that jarring helmet-to-helmet impacts are not the only danger.

“These previous types of head accelerations that maybe weren’t counted as hits, maybe they should be counted,” said Dr. Daniel Garza, an assistant professor of orthopedic surgery at Stanford.

“The arrows are pointing not necessarily to the hit, but where the force is coming to accelerate their head,” Garza told ABC News.

This team of researchers hope that once they can determine what kinds of player impact cause a concussion, they can begin to offer targeted data to help improve sports equipment in order to reduce concussive injuries.